These are the three ways of saying that line in the three languages I just cast Priscilla in around the world; Brazilian Portuguese, Italian and (duh) English.  Priscilla is becoming an international show now and the time came to cast two new productions in foreign languages for the first time, as well as to top up the Broadway cast.  Because it takes 24 hours to fly the creative team anywhere, and we had such limited availability, our producers decided to know all the casting off in a three week scamper around the world.  Like “The Amazing Race”, but at the end of each leg about a dozen men would come in dressed as women with a full face of makeup.

Sao Paulo was the first leg of the trip – we’d done half the casting there a couple of months ago, and this was the finals.  I found the city really challenging last time, but much more enjoyable on this trip – the weather better, my comfort levels higher, more new friends.  About 60% of the cast were already finalised before this trip, and another 30% shortlisted, so really the work this week was just filling a few gaps.  This gave us a few early finishes, crucial in a city where it takes an hour to get home if you finish after 5pm, as well as a few afternoons off.

On our first afternoon off we went to the train station.  It was a train station.  It looked nice and people caught trains there.  Presumably to go to more interesting places than a train station.  After ten minutes we went over to the museum’s cafe and ate pasta.  In Brazil.  It’s an odd cuisine.  I think I ate more pasta in Sao Paulo than I did in Milan a few weeks later.  The museum was a beautiful building with very little art in it.  And no English descriptions.  There’s no reason that a country should cater to English-speaking people, but my goodness it makes life difficult that they don’t.

After the pasta we wandered the park.  There was a kind of gloom to it, and my paranoid mind saw drug dealers everywhere.  After a while I calmed down and realised it was just a normal park.  Which did feature an outdoors “gym” with barbells made of steel and cement that people were actually lifting.  I tried to do this move from Men’s Health where I would pull myself up and over a bar like a gymnast.  I’m not a gymnast.

After the usual dance calls, renditions of “We Belong”, drag calls (the makeup artists in Brazil were wonderful and these men truly looked fantastic) we’d assembled a full cast and were planning on attending a concert that night.  Word came through that a hurricane was about to hit New York City and we had to decided whether to fly early to try and beat it.  Our producers in NY said to stay away as the city was going to shut down, but we felt we wanted to beat the hurricane so a mad few hours ensued where flights were dragged back 24 hours.  There was some dissension amongst the creative team about whether we were literally putting our lives in danger flying into a hurricane, but we decided to make a move – we finalised casting, sprinted to the hotel to pack and got to the airport ready to hit NYC.

Which we did at 630 am Saturday.  Our driver into town told us that the bottles shops had done a roaring trade the day before as everyone prepared for the city to go into lockdown.  He was from Florida and felt that hurricanes weren’t that big a deal, but Manhattan was eerily quiet.  The subway was closing at noon that day.  It was thought that it would hit at around 1pm.  We wandered down to Soho to try and do a little sightseeing but all the shops were closed.  We had coffee in a place that was about to close and then the rain hit.  Is this it? we thought.  It was absolutely pouring for ten minutes.  But then it stopped and it was clearly just…well, rain.

Seeing as nothing was happening in NYC that day we decided to start drinking at noon.  We wandered into a great Soho bar with a fun bartender called Whitney who gave us espresso martinis, then free shots, then crazy cocktails.  Midtown we hit Arriba Arriba and caught up with some of the cast of Priscilla – they’d been given two days off, along with everyone on Broadway.  Around four we decided to go up to Harlem to hang with the Divas at a hurricane house party.  Clearly, nothing had still happened.  Around ten we came back to the hotel.  Still nothing…now it was predicted to hit at eight am Sunday.  Got up around 9.  No disaster yet.  Checked out of the hotel at noon.  Still nothing.  The media had gone crazy, running around downtown looking at water lapping at the edges of the pavement.  They were willing something terrible to happen, but with joggers going about their business behind them, it really wasn’t too worrying.

Monday brought sunshine, shops reopening and finally some work to do.  Cast the two new Benjis that afternoon and saw the show on Broadway that night.  Everyone was still giving it and we looked at some dialogue changes that had gone into the show recently.  I rehearsed the new Benjis in the next day and got along to a dance call for several new ensemble members that were needed in the show.  There was a little rehearsal of the dialogue changes, but basically everything was tight in NYC.  Saw “Follies” which was wonderful and fraught as ever and then we headed out the next day to Milan to cast the entire production in five days.

Milan’s version of the show starts rehearsals in six weeks.  It was pretty worrying casting the show that close to the start date – we never have before, and what if there were roles we couldn’t cast?  We got to Milan a few days before auditions started and had a great night out with the producers and team there at a classic Italian restaurant – outdoors area lit by candles, tons of antipasto, great steak, about 40 bottles of red wine and tons of laughter.  Mostly at our attempts to communicate.  It’s funny that the drunker you get the easier it is to make sense of each other.

That weekend was spent exploring the city again and eating and drinking.  I jaunted down to Cinque Terre in a hire car.  A wonderful day that started as an utter debacle.  It took two hours to hire the car, it was completely pouring all the way down to this seaside down, but as soon as we hit La Spezia, the gateway to the area, the sun came out, it was blissfully hot and the chance of me being able to wear my speedos got higher and higher.  The area is ridiculously beautiful; winding roads through mountains, vistas always springing up to surprise you, pastel houses on clifftops, olive groves on vertical slopes.  I would have enjoyed it a lot more if I hadn’t been having a panic attack that our car was going to fall off the edge of one the roads.

But we made it down and into the third town of the Cinque Terre/Five Towns.  The peacefulness of the area was remarkable.  You wander via a little path past a winding canal, gardens built into rock walls, painted doors in stone gates and sun pouring down on you.  The town begins and it’s more of the pastel houses built up on three levels with little alleyways.  The harbour has a small beach, lots of cafes, a beautiful old church and water looks glorious. 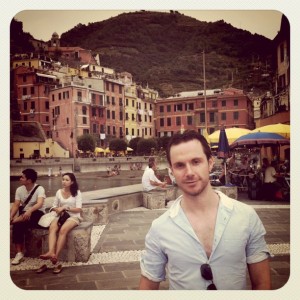 After a pizza lunch and vinho rossa della casa we dove off the rock walls into the sea.  It was blissful.  Until I tried to climb a rock wall and ripped my leg up.  Still, saltwater is very therapeutic.

Auditions started the next day and it was clear the Italian team had done a great job at choosing only the best for us to see – everyone that came in was appropriate with the skills required for the show.  It was interesting not to go through the process of eight not right people out of ten, and meant you gave a lot of focus and attention to every single person.  This was my first time hearing the scenes in Italian, which took a bit of getting used to, but ultimately I think will work wonderfully for the show.  The casting was no harder than anywhere else in the world, to be honest – as ever you struggle to find girls who can sing at the level Divas need to, and Bernadette is always the hardest role in the world.  Either the person walks in the door or they don’t.  But, to all our relief, at one point s/he did.

We finished the casting off by Saturday and were thrilled with the group we’d assembled and that I’d start rehearsing in just over five weeks.  The four leads are as good as any we’ve had for the show and, well, Italian men are gorgeous, so the male ensemble is the same.  The week was filled with lots of other highlights, too.  Milan is a very livable city – easy to get around by taxi or public transport (or bike, for that matter), tons of great bars and cafes and the weather was so warm the whole week that I almost came back with a tan.

But my goodness, sitting on the plane on the way home, remembering all the time zones I’d adjusted to, the languages I’d conversed in, the many different ways I’d learned to say “a red wine, please”, I thought it’s so unlikely that I’ll ever pack this much diversity into a working trip again in my life.  I’m pretty lucky.