The PR machine is already rolling into action on Priscilla with our first event likely to occur in the next few weeks – we started the day talking through the best ways to showcase our musical and what we’ve got in store for the public in the next few months, to really position this show out there.  Spud, our musical guru, flew in last night and reclaimed control of the rehearsal room for music calls.  I popped in and out and there was some very diligent work going on.  Alice, our Marion, was very helpful in translating on behalf of Spud – she’s lived in NYC, Sydney etc and is completely fluent.  We’re so lucky that we speak a language that most people make the effort to learn – if I had to get by on my Italian I would have to become much better at mime.

Auditions started in another room for our new Jimmy – Thomas had put two guys through their paces and luckily they were both brilliant movers and had a great look for the role.  Very fortunate as it’s incredibly difficult to find the right person for that particular slot – we’ve gotten lucky three times in the original casts but I was starting to worry that this one wasn’t going to work out for various reasons.  It was rumoured that one of the Jimmy auditionees was grabbed out of the line for Italia’s Got Talent, which is using our studios as the moment… Our choice joined the music call half an hour later – that seems to be the modus operandi of Priscilla Milano – bang!  You’re hired, you’re rehearsing. 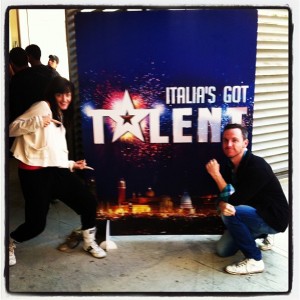 I then joined our lovely translation team who were up from Rome to go through the script line by line.  Translator is not quite the right word for what they do – they’re actually adapting the script because you can’t do a literal translation – you have to be a dramatist and use your language to recreate the essence of the original text, so that it feels the same but completely fluid in the new language.  As I blogged last time I came here, Priscilla is tricky because so much of the humour is wordplay based – puns etc – and the odds are always tiny that a singular Italian word can be found that does the double handling of the original joke.

The meeting went from 1130 until 530 and it was very concentrated.  There were our translators, Valentina and Toto, Felipe transcribing and Cristiana or Elizabeta overseeing.  Everyone had an opinion on the best replacement lines and it takes a massive amount of focus to understand whether a line is still doing the work it needs to on the show.  First of all I have them explain what the new line means literally – I know what it’s English counterpart is, but I want to know if the literal clunky translation has the meaning within it still.  And if it’s a new line (because a close translation couldn’t be made) if it will achieve the same result as the original line, or if we’re going to lose a character moment, a great joke, or a plot setup.  For example, we spent ages on this section;

Bernadette: How can you take anyone seriously whose nickname is Madge?

Adam: We take you seriously and your real name is Ralph.

This exchange alone has been worked on for ages in the English script and I’m well aware of what this seemingly innocuous exchange has to do.  We are trying to reveal that Bernadette was born Ralph, but in a way that ties in with the Madonna conversation they’ve been having and doesn’t come out of nowhere.  And is moderately witty.

So, into Italian – first problem – they don’t know here that Madonna is nicknamed Madge.  So the nickname setup is gone.  The first alternative was –

How can you take anyone seriously who named her daughter Maria Lourdes?

Which is apparently a strange name to Italians.  This was fine except Adam’s responses became a little non-sequiturish.

We take you seriously and your name is Ralph.

How can you take anyone seriously whose surname is Ciccone?

We take you seriously and your first name is Ralph.

Fine, except half the room disagreed that Ciccone is a strange surname.  I asked if Madonna was a strange name to Italians?  Yes, they all agreed.  So –

How can you take anyone seriously whose real name is Madonna?

But then a very strange discussion occurred where most people in the room beside me claimed that her real name wasn’t Madonna – that it was a stage name.  There was a lot of back and forth about this (I was baffled, isn’t it legendary that her real name is Madonna?) But Wiki was consulted and yes, Madonna Louise Ciccone it is.  So finally we agreed that the line could be as above, followed by –

We take you seriously and your real name is Ralph.

Imagine that conversation about every second line and you can see how intense the day was.

But we pushed on through and got agreement on the adaptation so the cast can get scripts tmw and we can rehearse scenes.  It was very educational, to say the least, and I became quite adept at reading Italian by the end of the day.  Well, the Italian of the Priscilla script anyway.  I know most of the slang words for homosexual, penis and bum now.

Now, the most famous line in the show is “a cock in a frock on a rock”.  When the film was dubbed, they kept the rhyming but couldn’t find the right matches for the sentiment – so it became, in literal translation “a bitch who suntans her pussy”.  Now this line is NOTHING like the joke or sense of the line, but it is famous throughout Italy from the movie and thus has to be in the stage version.  However nonsensical it seems!